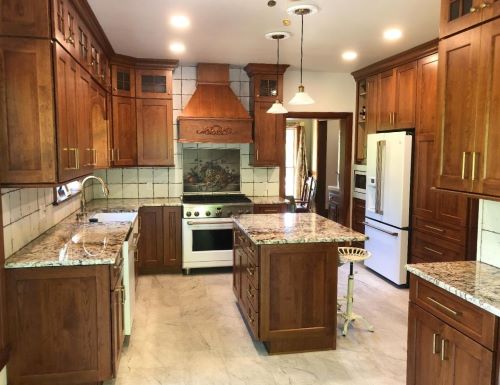 Ideas for an older home kitchen remodel in Coal Center, PA came from kitchen designer Brandon Vadella. The old, outdated and inefficient kitchen was given a completely new look, thanks to Brandon, owner of River’s Edge Cabinetry, and his crew.

The homeowners came to him for ideas for their kitchen remodel project. They were fed up with having to cook in a crowded space with appliances that weren’t working properly and that didn’t have enough storage. They also were tired of the look of the kitchen because it didn’t reflect their style or taste.

Most older homes have doors and windows a kitchen designer must work around if the room’s layout is not going to be changed. And this was true for Brandon when he began work on the new kitchen design. The homeowners were keeping the same footprint as the existing kitchen, which meant no moving walls or closing up doors and windows.

The homeowners revealed during their meetings with Brandon that they wanted a better work flow, improved functionality and more storage in the new kitchen, something they were missing in their old kitchen.

What the Homeowners Wanted

Overall, the homeowners wanted to improve and upgrade all aspects of their kitchen. Especially important to them was getting more storage. As shown in the “Before” pictures above, the tops of the cabinets were used as storage because the cabinets were full to over-flowing.

Other items on the the list of “must-haves” for their new kitchen included:

As a bonus, one of the walls in the kitchen wasn’t used for anything other than a shelf. They told Brandon they wanted a built-in bar area installed in that space.

Brandon and his team were able to meet the goals for this remodel project. As the “After” photos show, the homeowners got everything on their wish list.

The new flat panel Cherry cabinets from Brighton Cabinetry are installed in full overlay. The homeowners now have upper cabinets that extend to the ceiling, and they got crown moldings to complete the look. The gorgeous natural-looking stain on the cabinets is classic. Brighton Cabinetry products come with a limited lifetime warranty. The homeowners can be assured their cabinets will look good and work well for as long as they own their home.

The appliances in this new kitchen are from GE, the Cafe Series. The Cafe Series allows purchasers to customize their new appliances by choosing a base color and a handle and knob finish color. Brandon’s customers chose matte white as their base and brushed bronze as the accent color for a stunning combination that is a definite departure from stainless steel.

The floor is porcelain tile from Happy Floors. Rivers Edge is a one-stop shop for all products for the kitchen (except appliances), and they supplied the floor tiles.

The countertops are Dolomite.

As Brandon promised, the new kitchen has much more in-cabinet storage than the previous kitchen. Because they purchased custom cabinetry, the homeowners got drawer dividers for silverware and utensils, a knife holder, a mixer lift, roll-out shelves and a spice pull-out conveniently located next to the stove.

The wall that previously held nothing but a shelf (see “Before” photo at left) is now a bar with wine storage, an under-cabinet fridge and plenty of in-cabinet storage for glassware, bottles, coasters, openers, cocktail napkins, straws, stirrers and other barware.

The cabinets, countertops and tile are the same as the others in the kitchen. Notice the beautiful finished sides on the bar cabinets, both upper and lower. Detail like that shows the beauty of custom cabinets.